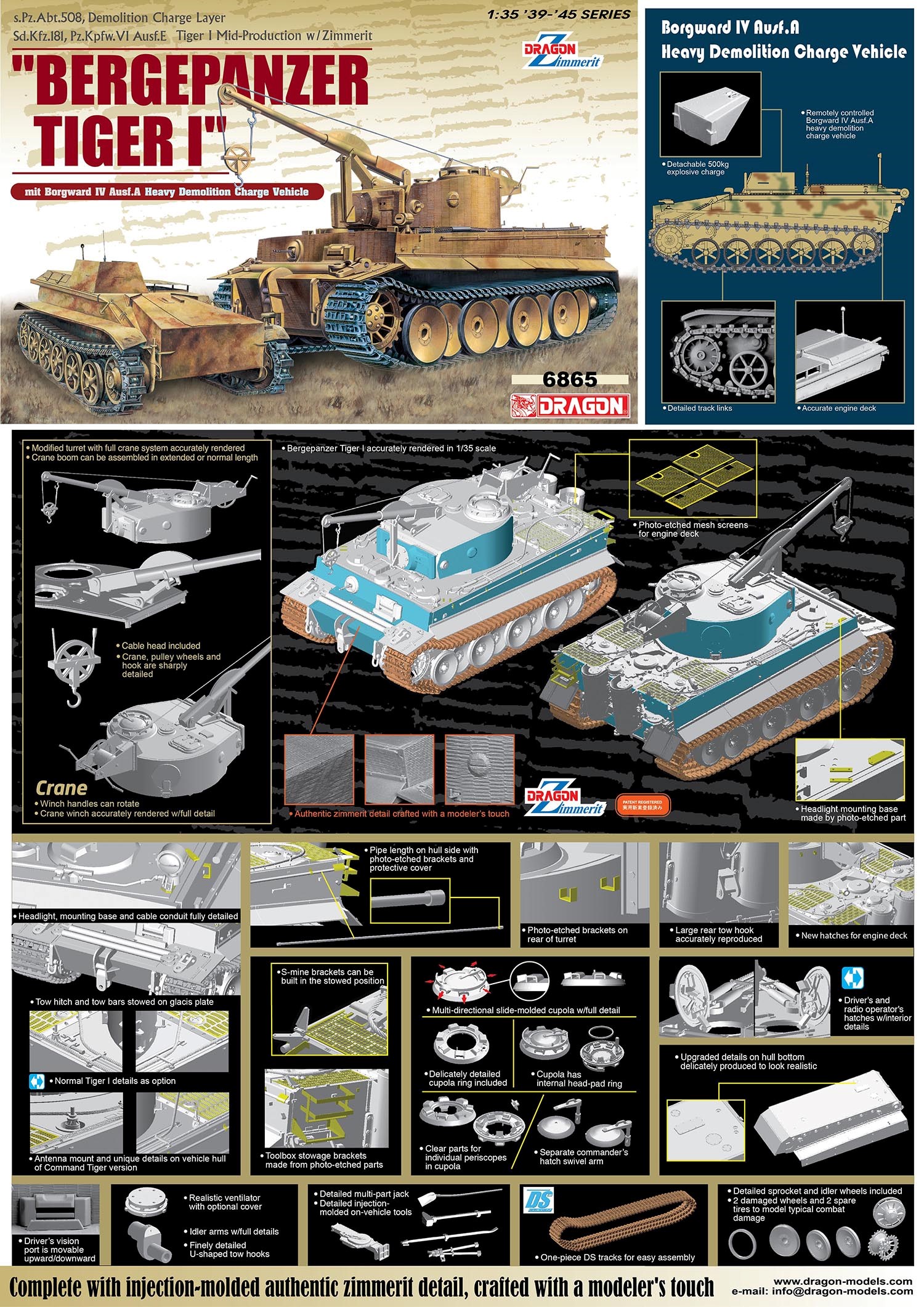 Dragon has come up with an extremely exciting German combination of a “Bergepanzer Tiger I” and a Borgward IV Ausf.A heavy demolition charge vehicle. Operated via radio by its crew, the remotely controlled Borgward IV could drop off a 500kg explosive charge. As for the recovery vehicle, it’s main 88mm gun had been removed, and a small tubular crane was fitted on the turret instead. Both tracked vehicles are well detailed and beautifully engineered. Together, they permit modelers to create a fascinating diorama straight from the box, or by the same token, the vehicles could be used separately according to the modeler’s wishes. Either way, these two vehicles in one box represent great value. 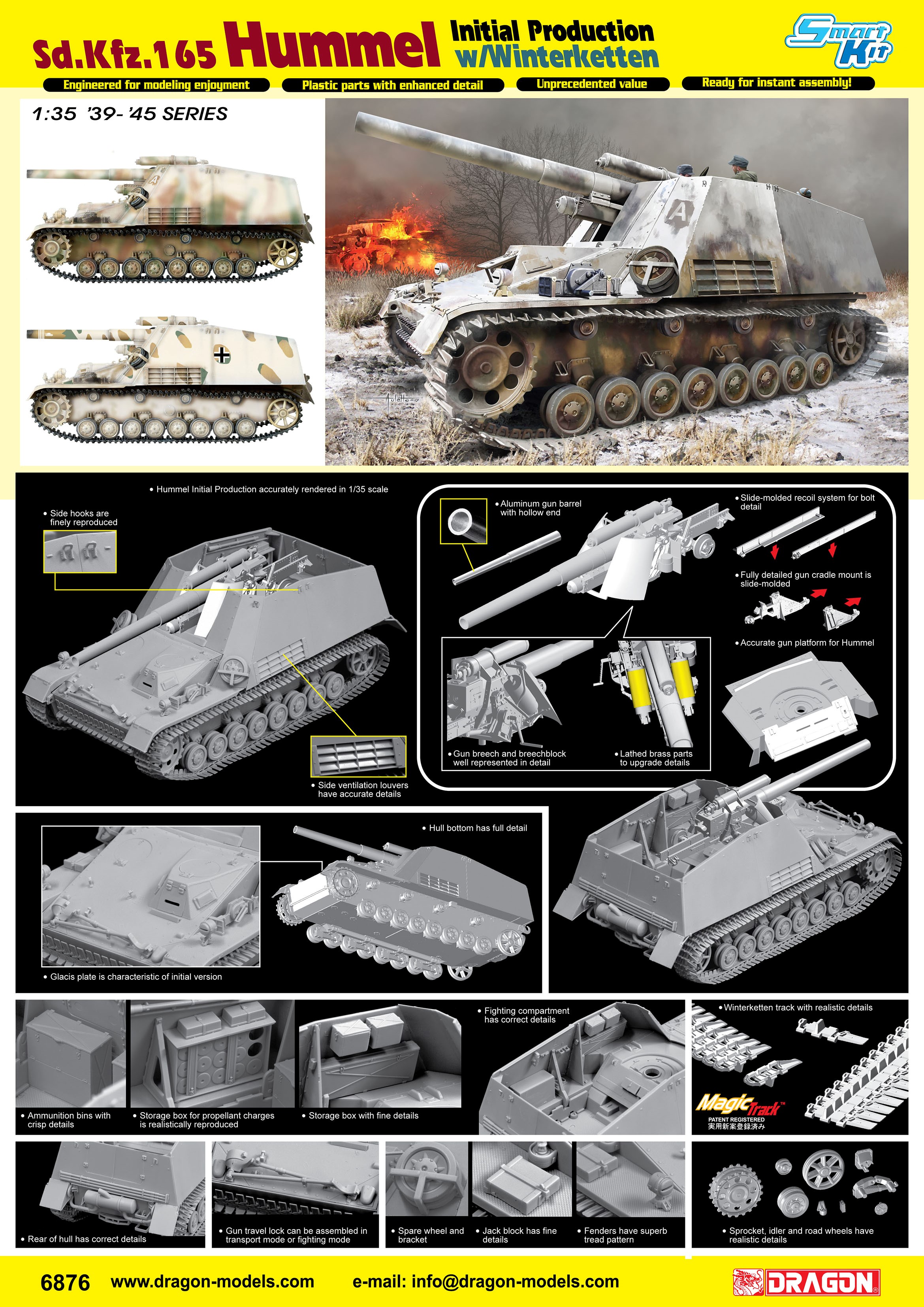 The Sd.Kfz. 165 Hummel was produced from late 1942 onwards because of an urgent need for artillery that could keep pace with Germany’s panzers. Its combat debut occurred during the titanic Battle of Kursk. Operated by a crew of six, the SPH could also carry 18 rounds for the main armament. A total of 714 Hummels were built by the end of WWII. Dragon’s Hummel Initial Production variant has an astonishing level of detail and accuracy. Now it has been revamped yet again, and what sets the newest release apart is the inclusion of Winterketten tracks. The Winterketten were extended track links to improve traction in icy and snowy conditions. And to make it as easy as possible for modelers, Dragon has produced the Winterketten as Magic Track. Since this Magic Track line is not always easily obtainable today, this is a perfect opportunity for folk to get hold of these again. The armor plates of the fighting compartment have also been made using Dragon’s Ultra Thin technique to give a true-to-scale appearance. This allows interior fittings to be accurately sized and shaped. The flight of the bumble bee has soared to new heights thanks to this wintry Hummel! 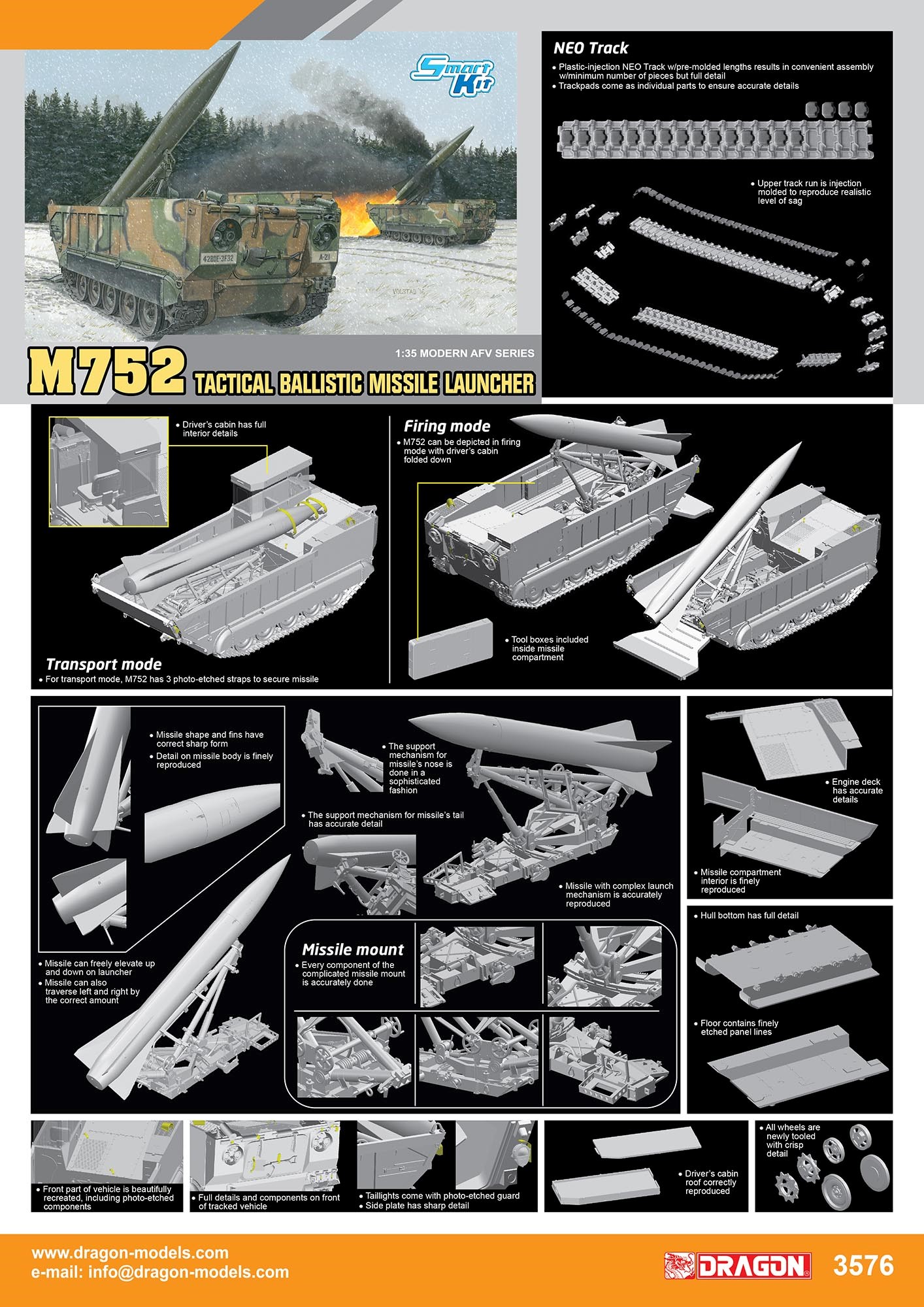 This M752 is understandably 100% newly tooled. Furthermore, it’s the only full plastic kit of this US-manufactured tracked missile launcher currently available on the market. The missile can be elevated up or down to represent firing or transport modes respectively. The missile mount and associated elevation mechanism are sophisticated and strong enough to support an accurately detailed Lance missile. This new kit captures the somber days of the Cold War, and so this Lance self-propelled missile launcher would make a fine addition to any modern warfare kit collection. The Lance system was used by the US Army, Belgium, Germany, Israel, Italy, the Netherlands and UK, meaning that this new kit offers enterprising modelers a lot of versatility. 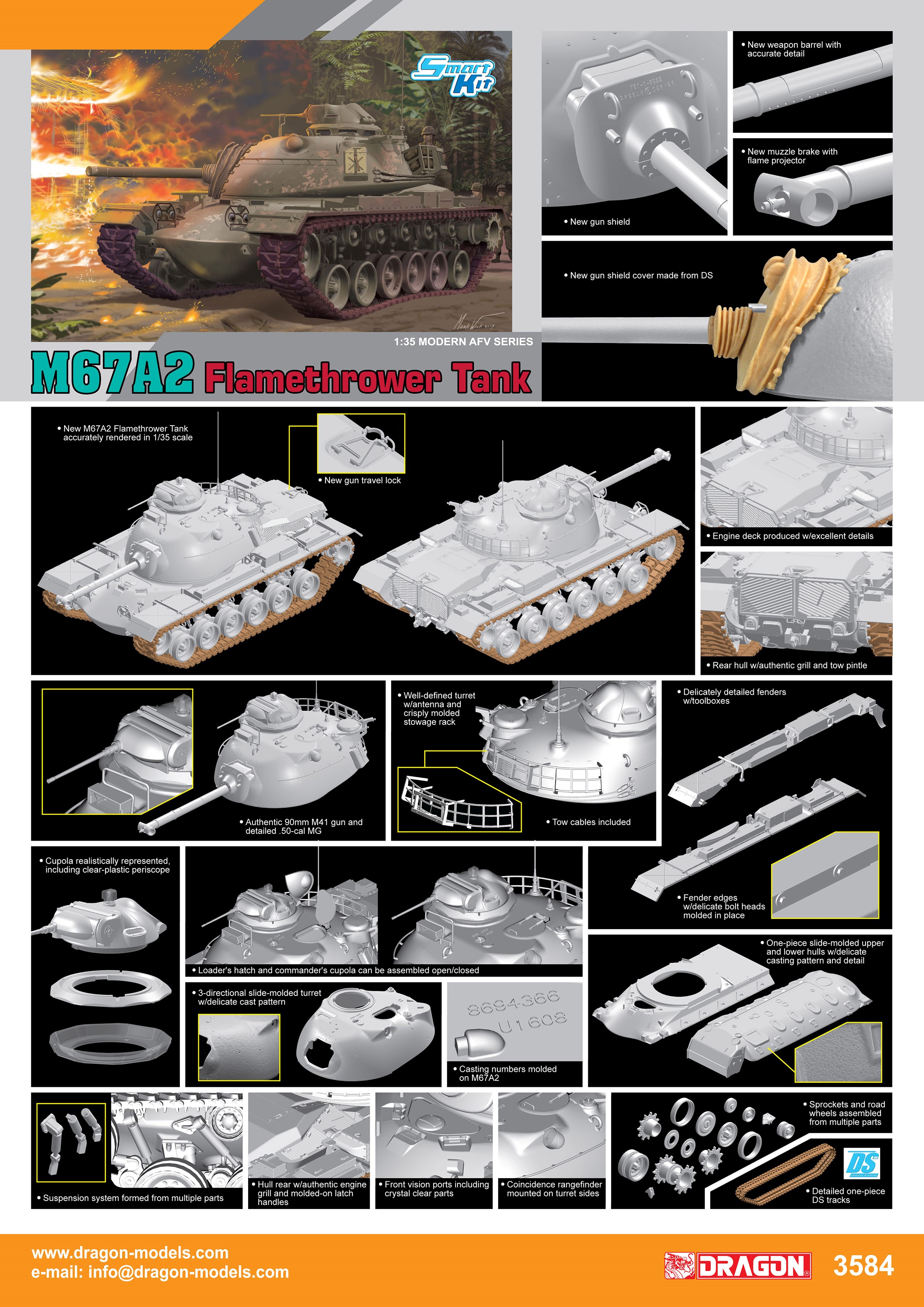 Building further on the success of its line-up of 1/35 scale kits of the famous M48 Patton medium tank, Dragon has produced the interesting M67 flamethrower used by the US military. Nicknamed the “Zippo”, it was originally based on an M48A1 tank hull, with the usual 90mm gun replaced with an M6 flame gun connected to an M7A1-6 fuel and pressure unit. The 48-ton M67 was disguised somewhat with its flame gun hidden inside a dummy gun tube. The first M67 was completed in 1955 and a total of 109 units were manufactured for US Marine Corps and US Army service. They were fielded until 1974, which meant they saw combat in Vietnam. This 1/35 scale kit inherits excellent features of Dragon’s preceding M48-series models, but it has been modified to represent an M67 Flamethrower Tank. This includes brand new components such as the gun shield, dummy gun barrel and muzzle brake. Also new is the flame projector inside the muzzle brake. The mantlet cover is represented by DS to replicate the correct look of the material. Other appropriate changes are made – for example, the headlight brush guards were altered to clear the flame gun’s lower depression angle. This is a magnificent kit of the M67, and it’s expected to be red hot with modelers all over the world!

There were many great variants of well-known Sd.Kfz.250 family. One of the rarer ones was the Sd.Kfz.250/4 Truppenluftschutzpanzerwagen . Armed with Zwillingssockel 36 dual-mount machine guns, it was envisioned as a mobile antiaircraft vehicle. The mounted twin MG34 weapons with an elevation range of +10� to 90� were protected by an armored shield in the rear compartment. The weapons were operated by a single soldier on an integrated seat. Dragon has expanded its formidable Sd.Kfz.250 family with a 1/35 scale kit of this Sd.Kfz.250/4 Truppenluftschutzpanzerwagen  mit Zwilling MG34. While this halftrack variant never saw battle, it was field-tested, offering modelers ample scope if they elect to put it into a suitable diorama. The Zwillingssockel 36 is newly tooled with highly detailed plastic injection and photo-etched parts. Just like the original dual-MG mount, it can also traverse 360�. The front armored shield is also newly tooled. To create this Sd.Kfz.250/4 variant, the fighting compartment interior has been appropriately rearranged. As part of Dragon’s facelift Sd.Kfz.250 series, it has an updated upper hull and Magic Tracks. This halftrack type has not appeared as a plastic kit before, so it offers modelers something different. Enemy aircraft beware with this new 1/35 scale kit!